The two-stage mechanical oscillator of academician Veljko Milković has attracted a lot of attention from the domestic and international scientific community over the past 30 years. This is supported by numerous scientific papers published around the world, as well as published opinions of numerous scientists and enthusiasts, which will be published in the latest book being prepared by the Research and Development Center VEMIRC. 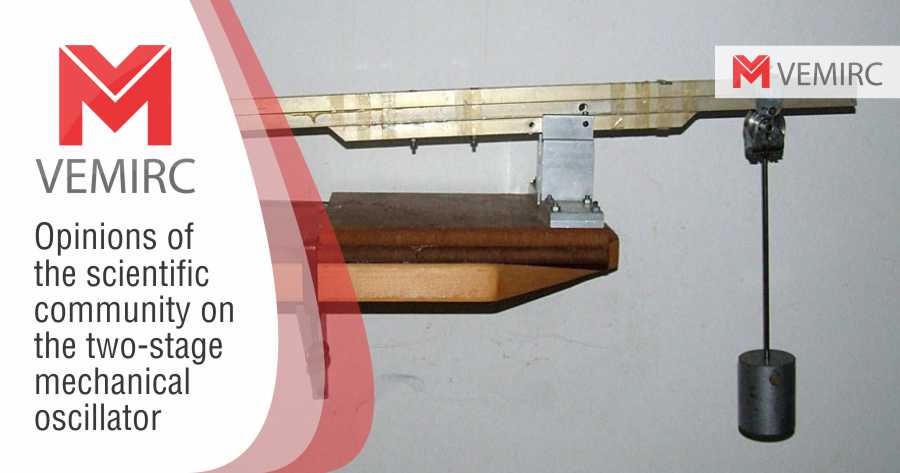 Among the local scientists who gave their opinion is prof. dr Bratislav Tošić,, (1935 - 2010), former member of VANU (Vojvodina Academy of Sciences and Arts) and full professor at the Faculty of Science and Mathematics of the University of Novi Sad. In the text, which is accompanied by the mathematical analysis of prof. Dr. Tošić, among other things, states:

It is estimated that the input of gravity in the performance of BIPHASE OSCILLATOR is around 80%, which is convenient for use with piston pumps, compressors, presses, electric generators etc.

Also, among the figures who gave their opinion about the two-stage mechanical oscillator is Dr Peter Lindemann, a well-known American researcher, inventor, historian, author and lecturer in the field of advanced alternative energy sources. He is known, among other things, for having published several books on free energy and technologies that deal with it. In the opinion on the two-stage mechanical oscillator that he gave at the end of 2006, it is stated, among other things:

Measurements by Milkovic and others have confirmed, under favorable circumstances, that 12 times more energy is availablet o perform useful work at the other end of the balance beam than is required to keep the pendulum swinging. This certainly ranks as one of the most important discoveries in science in the last 300 years.

Nebojša Simin, graduate physicist, retired professor of physics from Novi Sad, former expert advisor for unconventional energy sources and secondary raw materials at the Provincial Committee for Energy and Raw Materials, secretary of the Provincial Nuclear Commission, secretary of the Center for the Comparative Study of Technological and Social Progress - gave his opinion. Among other things, Nebojša Simin published two papers on the subject of a two-stage mechanical oscillator, namely: “Energy surplus” in pendulum and two-arm lever system (2009), Free energy of the oscillating pendulum-lever system (2007). In his commentary on the two-stage mechanical oscillator, he states, among other things:

It should also be said that the definition of perpetuum mobile should be enhanced, because this is not about violating the law of conservation of energy, but about converting the work of the gravitational force into useful work... It goes without saying that the confirmation of this assumption would be a first-rate sensation.

The latest opinion was given by graduate engineer Slobodan Mašanović, who states: "I believe that the invention of Veljko Milković, the "Two-stage mechanical oscillator" is the greatest scientific discovery in the history of mankind, which has been experimentally proven in many places around the world. It is a discovery that changes the whole the scientific paradigm of both physics itself and many other disciplines." This opinion was also published by YouTube channel Putni Dnevnik during an interview with academician Veljko Miilković, which you can watch in the video below.

Watch the interview (in Serbian)