NEW INTERNATIONAL SCIENTIFIC PAPER: Design and manufacture of a hand pump for water with a pendulum capacity of 20l/h and raising water to a height of 1m

A doctoral dissertation on the topic "Building blocks of autopoiesis in organization 4.0" was published in Slovenia, which deals with the organizational abilities of living beings, and the references mention Veljko Milković and, especially, his book Energy turning point or apocalypse. In this paper, the author Tanja Balažic Paček equates the genius of Galileo with Veljko Milković and his explanation of oscillations. 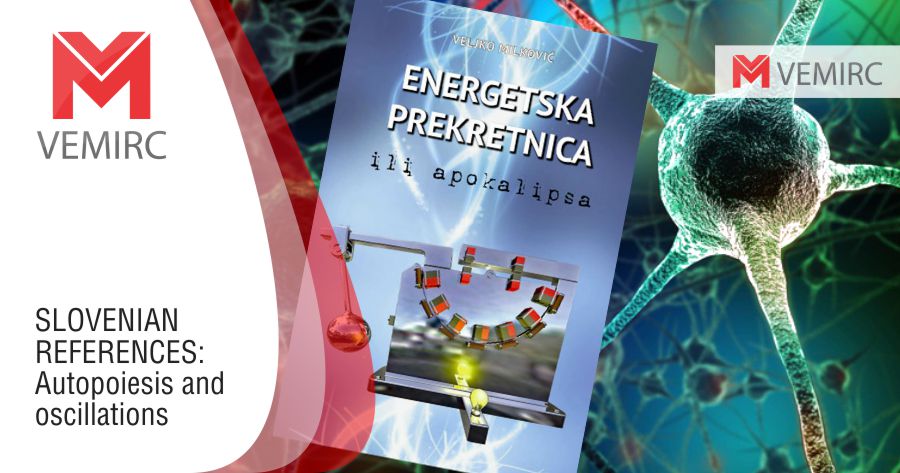 Autopoiesis was originally presented as a system description that was said to define and explain the nature of living systems. A canonical example of an autopoietic system is a biological cell. For example, a eukaryotic cell is composed of various biochemical components such as nucleic acids and proteins, and is organized into limited structures such as the cell nucleus, various organelles, the cell membrane, and the cytoskeleton. In a narrower context applied to human beings, it concerns man's ability to, in addition to biological sustainability in terms of species extension, also organize production-ecological sustainability through modern industrial production and distribution of goods and services.

In this sense, the author Tanja Blažic Paček based her thesis on the idea of autopoiesis in organization 4.0, which represents, in an industrial framework, a kind of community of physical resources and advanced digital technologies, such as artificial intelligence (AI), robots, drones, autonomous vehicles, 3D printing , etc. However, one of the discussions is related to how much the human mind is capable of making a creative leap in organizing such systems. When we say "creative breakthrough" we mean the next level of ecological sustainability by applying clean technologies instead of the dirty ones that are currently in use, and that's where the two-stage mechanical oscillator is as a potential source of electricity.

In this extensive doctoral dissertation, the author quotes, among other things, Veljko Milković from his book Energy turning point or apocalypse:

Why did Galileo see differently? Because he was simply a genius, which we also see with the inventor Milković, who observes, innovates and defines swinging as oscillation. The momentum towards apocalypse or self-destruction is described by Milković (2016, pp. 1-2) in the section "Energy turning point or apocalypse". He cites examples of self-destruction of the planet through wars and energy-inefficient technology that is not in harmony with the movement of living things in the biosphere. Through the observation of living beings in the natural environment, Milković realizes that all natural movements are oscillatory, both in movement on the ground and in the air, and in the movement of internal organs. It is assumed that oscillatory motion is a rational phenomenon in nature and that the development of energy went in a less efficient direction with the use of rotary drives, which consume huge amounts of energy to the detriment of the environment.

The author of this work in the true sense of the word recognizes the principles of autopoiesis in the explanations that Veljko Milković gives in his book. Among other things, Milković states that energy sources are one of the main causes of modern wars, and that these wars could be stopped by applying technologies that already exist and that are in harmony with the movement of living beings in the biosphere, and that with such an approach, they would have a sustainable harmony with the environment. This primarily draws attention to the two-stage mechanical oscillator as a potential source of electrical energy. In his book, Veljko Milković states, among other things:

Birds fly by flapping their wings, similar to fish that oscillate their fins and tails. During the movement of humans and terrestrial animals, one can also speak of oscillatory movement, and the same is true with internal organs. It is probably not a coincidence that living beings have such rational realizations. However, through the development of energy, it went in a much less efficient direction through the widespread use of rotary devices (turbines, propellers, rotors, flywheels, gears, pulleys, sprockets, cam mechanisms...). This is how enormous energy is wasted through noise, wear and tear, cavitation, all to the detriment of the environment. The enumerated artificial creations in the biosphere cannot possibly be more favorable than more natural oscillatory devices with a pendulum, the use of which is incalculable, but first of all for stationary machines (pumps, compressors, presses, generators...).

The appearance of these types of scientific research papers, in which studies of oscillations and the two-stage mechanical oscillator of Veljko Milković are a source of ideas and inspiration for application in some other fields, apart from mechanics, is a true indicator of the success of this invention and the many years of research into oscillations and their application. Papers like this one inscribe the name of the Serbian inventor Veljko Milković and his scientific research in far wider scientific circles than those that concern mechanics and physics.

Read the doctorial thesis (in english from page 259)